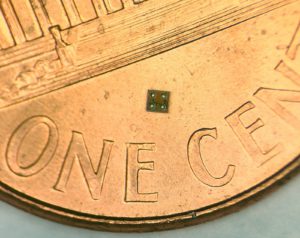 ALISO VIEJO, CALIFORNIA — March 15, 2016 —Indie Semiconductor announced today that the USB Implementers Forum (USB-IF) Compliance Program has certified the new indie iND80001 Lodestar chip as USB-C and USB PD 2.0 compliant. The chip utilizes E-Marker technology to facilitate USB power delivery. At less than 1mm on a side, it is the smallest device available.

Lodestar is designed to fit inside cables and forms part of the power delivery mechanism for the new USB-C cables that are set to take over the majority of interconnect in all kinds of applications. As well as transmitting data at up to 10 Gbps, cables with E-Marker devices can deliver up to 100W of power in either direction. A laptop with a USB-C connection can use it for power, display, connectivity and storage, all through one single small connector. The USB-IF expects USB-C to become widespread more quickly than any previous USB standard as a result.

The E-Marker chip is supplied to indie by eSilicon Corporation. The chip is fabricated through eSilicon’s online STAR platform. Both a multi-project wafer (MPW) prototype and a full-production GDSII handoff were implemented with STAR.

Vincent Wang, indie’s APAC VP of sales and marketing commented, “Cable manufacturers in China and Taiwan tell us they have been waiting for a device like this in order to make their cables USB-IF compliant at really low cost. The volumes for products like this are expected to be very large and we are ramping supply to meet them.”

“The mission of the STAR platform is to facilitate silicon implementation of breakthrough products around the world,” said Mike Gianfagna, eSilicon’s VP of marketing. “The E-Marker chip was developed using eSilicon’s STAR Explorer environment, and we’re delighted to support indie’s productization of this enabling technology.”

indie’s Lodestar chip, which is available now, can be ordered either in a WLCSP package of 0.8 x 0.8mm or in standard DFN/QFN packaging. It is PROM programmed through the vendor messaging protocol and contains a fuse-lock mechanism. indie can supply suitable paddle board designs with either four- or six-layer options to support both USB 2.0 and 3.1 Gen 2 speeds.

indie also supports a production test solution that will allow customers to both check continuity and perform E-Marker programming in a single insertion, thereby not only saving cost but significant resource on the production line.